This morning on her way out the door heading for school my daughter said her usual “see you later”. I responded with my daily “Have a good day. Love you”. Then she reminded me, “I won’t be back tonight”. She’ll be gone all night babysitting for friends. But those words stung my ears. I won’t be back.

Both of my older kids’ schools received threats yesterday. They determined that the threats weren’t credible, and I’m sure they came from an adolescent who thinks making a joke out of the death of children will get classes canceled. Yet when my mother heart read two emails stating that both schools had received threats through social media, emails, and calls, it made my work day feel longer. Because those threats that we think might not be credible might, in fact, be real. And today, I guess I won’t know until I’ve thrown myself at the mercy of God when the Twitter starts screaming that my kids’ schools have an active shooter.

I’ve been a part of the Facebook debates. I’ve seen how irate people can get when you suggest that maybe, just maybe, it’s violent video games that have desensitized our children into warfare. I’ve also seen how Christians who profess to worship the God of ‘turn the other cheek’ hide behind their guns and their so-called God-given rights and freedoms to own them.

I’ve heard the arguments. I’ve been embarrassed of my community. I’m embarrassed of myself as I’ve attempted to come up with a quick solution to all this death and hate. Can we search 300 million homes in the next week? Can we take on a billion dollar industry and win? Can we simply just homeschool?

And still, we don’t seem to want to actually discuss the reality of how it could be anything and everything that makes our culture what it is today. It’s us. It’s all of us.

If I wanted to raise a school shooter, first, I would let media raise him instead. From early on, I would let him watch the Disney Channel, and he would rarely see my smiles as he’d be plugged into a screen. And when he would look at me, I’d be glued to my own personal screen as well. Then, as he ages, I’d let him watch tween shows where he would quickly learn that the children are always right and that parents are usually useless and disinterested.

Around age 9, his father and I would grow weary of our relationship and either divorce or go on our own adventures to “find ourselves”. But, no worries, because we will train our son to achieve the greatest dream of becoming a professional athlete, the pinnacle of success. He wouldn’t notice our dissolving familial commitment because he would be shuttled from one sport to another. Kids are resilient after all.

At 10, His still undeveloped brain would start to watch Youtubers from around the globe who may or may not have a moral compass, and he’ll start to play video games that train him that death is temporal before his frontal cortex knows otherwise. But the games keep him occupied, quiet, and still. I try my hand at them when he isn’t home and get a kick out it. My son will see his first porn on his phone in his bedroom at 11:30PM. I try to tell him that it’s a normal interest, but he probably shouldn’t look at it.

At 11, I’ll realize that I’ve neglected his spiritual development, so I’ll drag him to church and try to squeeze in youth group events between soccer, football, piano, and baseball practice. I’m surprised that he doesn’t enjoy church and can’t seem to make friends at youth group when he’s there at least once a month. But I simply don’t enjoy church either, and I complain regularly, in ear-shot of my son, about how the music is so antiquated and the preaching is lame. Why can’t the church be about what I want? We try several other churches to keep it interesting.

At 12, my son will bring home a failing grade. He is frustrated and embarrassed and blames the teacher. I do too. So I call the teacher and give her an earful. While I’m at it, I call the coach and tell him my son has been working harder than all the others so he’d better start in the next game. Of course, I won’t be there because I have a date after a late business meeting, but I’m sure to remind my son to practice so he can be better than the other kids. College recruiters are only six years away! Go ice that shoulder, buddy!

At 13, my son will start to notice girls, and I’ll ask if they are pretty, rather than ask if they are smart. I’ll make jokes about women regularly and laugh at the sexist comedy on HBO. He’s probably heard it on the bus anyway. My son decides to add marching band to his packed schedule to be with a cute girl. I’m relieved at more entertainment for him because he stunk at football, and I’m working now more than ever.

When my son turns 14, I’ll be deep into my career and myself. He is so busy with teen life that family time doesn’t exist. We haven’t had a family meal in months. Church didn’t work out for any of us, and the guilt trips are more than we can take every Sunday. Not to mention that God loves and forgives us anyway so why go? Haven’t you heard of grace? Clearly, those people at church haven’t, but we smile and pretend to like them when we run into them at Walmart.

At 15, I’ll take my son out shooting and rage about my rights to believe what I want and own what I want unwilling to discuss any other options. I’m an American. I have rights, obviously, everyone else doesn’t have their head screwed on straight. I watch a news channel that affirms me in this every day. Those idiots can yank my rights out of my cold, dead hands.

At 16, my son stays in his room whenever he is home. And I don’t check in much, both because I’m busy, and he is practically an adult. The fight to get him to clean is too time consuming. I check in on his grades to make sure he can get to college. He struggles in English, and I hammer him for it. I remind him that he’ll never get into college being so lazy. I guess he has friends at school. Who knows? I’m looking forward to two years, when he is out of my hands and I have the place to myself.

We have systematically abandoned childhood. We have busied the children without giving them time to learn the value of failure. We have taught them to follow their hearts while training them that success is measured in popularity, achievement, and money. We don’t model servitude. We model self-actualization with zero accountability. We have become our own gods and have trained teenagers to bow only to themselves. We dehumanize people of whom we disagree, and we are incapable of self-sacrifice for the good of all. Should we be surprised when a child picks up a gun and shoots up a school as they shockingly discover that they cannot achieve the standards set before them, when they’ve been trained that people are only people when they agree with you, and when they realize that their community never looked deeper into their lives than how many medals they received?

and try to convince myself that I am not alone.
Yet, I listen to the voice pull me further from my home.

I see my reflection and wish a shattered mirror.
I listen to my failures and focus on my error.

I try to hear Him in the wind and the rain;
turn my aching ear to hear His voice again.

I sing the songs, and I know the steps.
I’ve heard the sermons, my boxes are all checked.

But I’m empty and I hear no calming voice
I cover my ears to shut out my noise.

I heard your prayers. I see your tears.
You’ve never once danced alone.
I walked those paths, felt the rocky soil
of that place that you call home.

I’ve been alone, without a friend,
not one to heal my wounds.
I felt the sting of goodbye, the ache of hate,
the glares from across the room.

But, the only difference between you and I,
that piece that blinds your scope,
is the empty tomb I left behind;
the assurance of your eternal hope.

I hold those hands you lift in prayer
while I hold the sky above.
I’m in the wind and storms you feel.
I’m the ever present love.

You’ll never fit within that space.
That world is not your home.
My gift for you is on the path of grace
My Spirit won’t leave you alone.

I ache to show you your home above,
a home meant just for you.
I left this place of perfect love
to offer everyone another view.

I took on pain and guilt,
and carried all the shame.
My heart breaks alongside yours
as I think of every name.

But, I know it hurts.
and I know you’re tired.
I see you try and try.
I won’t walk away, won’t give up, won’t ever say goodbye.

So, lift your head to see the end.
Find your joy along the path.
Pain will come along your way,
but there’s purpose in each task.

Your journey doesn’t end there.
Focus on what’s to come.
Your journey ends right here with me,
where the sun never met a horizon. 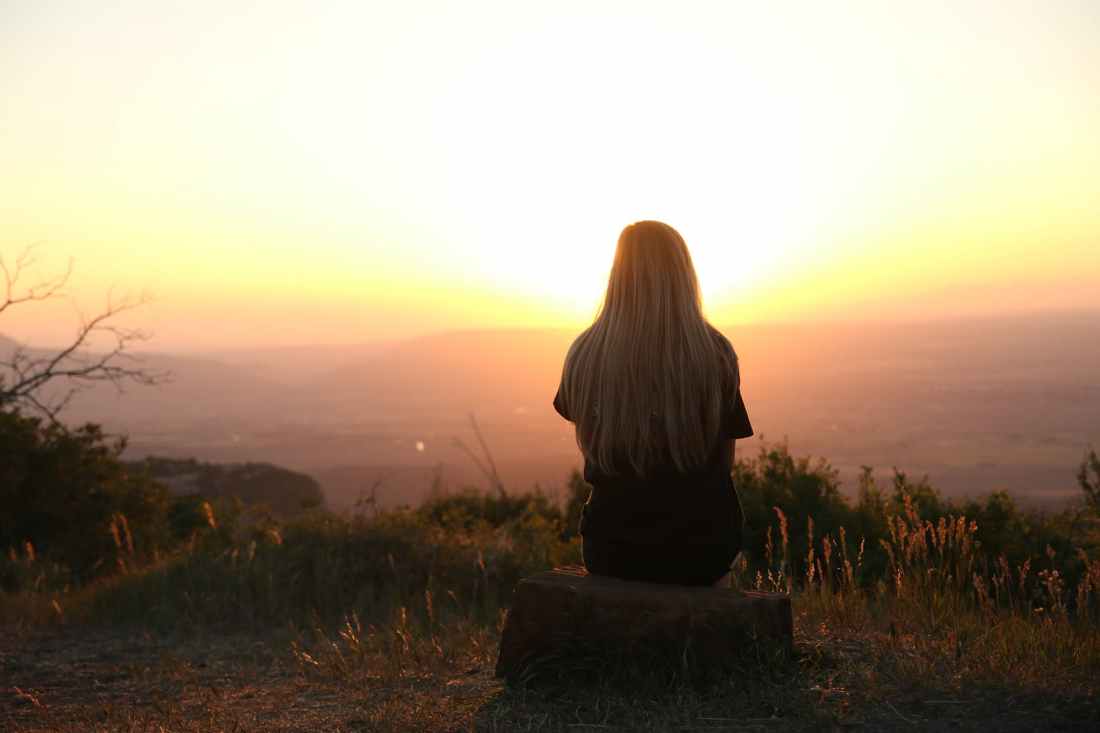